Spring Falling is the second mini album by Yesung, released on April 18, 2017. The physical album was released in two versions: normal and limited edition. The song "Hibernation" was released as a pre-release track and the song "Paper Umbrella" was used to promote the album. The limited edition of the album includes Yesung's solo version of the song "At the Time". 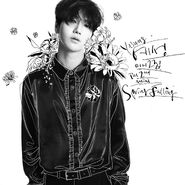 "Paper Umbrella"
Add a photo to this gallery

Yesung for Spring Falling
Add a photo to this gallery
Retrieved from "https://superjunior.fandom.com/wiki/Spring_Falling?oldid=4238"
Community content is available under CC-BY-SA unless otherwise noted.