Miss You (너무 그리워; Neomu geuriweo) is the first mini album by S.M. The Ballad, a unit consisting of Kyuhyun from Super Junior, Jay from TRAX, Jonghyun from SHINee, and Jeno, released on November 21, 2010. The songs "Miss You" and "Hot Times" were used to promote the album. 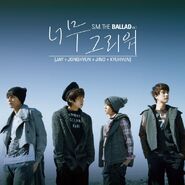 "Hot Times"
Add a photo to this gallery

S.M. The Ballad for "Miss You"

Kyuhyun for "Miss You"
Add a photo to this gallery
Retrieved from "https://superjunior.fandom.com/wiki/Miss_You_(album)?oldid=4557"
Community content is available under CC-BY-SA unless otherwise noted.