"A Day Without You"

Breath is the second mini album by S.M. The Ballad, released on February 13, 2014. The album was sung by a different line-up of artists, consisting of Yesung from Super Junior, Zhou Mi from Super Junior-M, Changmin from TVXQ, Zhang Liyin, Taeyeon from Girls' Generation, Jonghyun from SHINee, Krystal from f(x), and Chen from EXO. The songs "Breath" and "Blind" were used to promote the album. 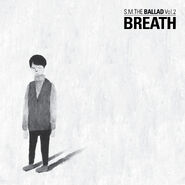 "Blind"
Add a photo to this gallery

Retrieved from "https://superjunior.fandom.com/wiki/Breath?oldid=4571"
Community content is available under CC-BY-SA unless otherwise noted.